How do theater artists choose what to perform? How do they create an ensemble, design a costume, or craft an argument?

In their art, Thinkery & Verse place disparate traditions in direct conversation with one another. A performer from America, for example, listens to a poet from Iraq. Or a noir detective story receives in an interpretation in verse. Or we rehearse a new play in rapid repertory with a classic. In all cases, we pursue an 'edge effect,' where experimentation can flourish, and where we can challenge our artists to achieve new heights in creativity and aesthetics.

We keep 'the edge effect' principles in mind as we create our plays. Below, you will find photographs from our work, and examples of how we challenge new and canonical texts.

Bride of the Gulf 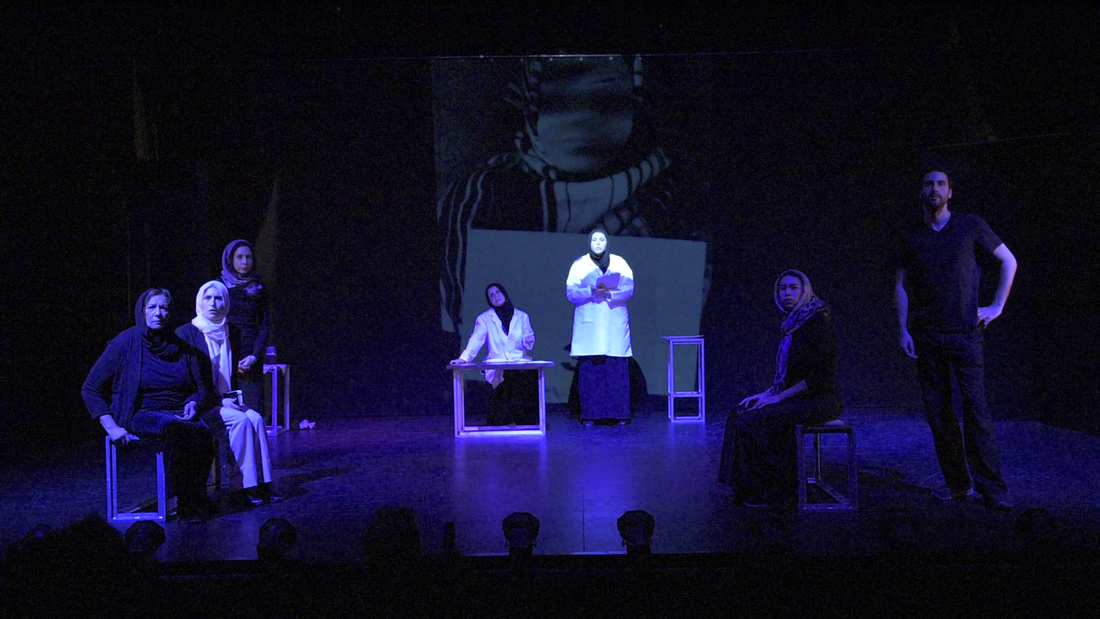 ​Bride of the Gulf, our most ambitious work to date, received a workshop at Hudson Guild Theatre in downtown NYC before premiering at the Edinburgh Festival Fringe in 2018. The plot was simple: Amid the violence that engulfed southern Iraq after the British withdrawal of 2007, a sharp-witted Iraqi woman goes in search of her missing husband at the behest of her mother-in-law. To create the play, we asked a veteran of the Iraq war, J. M. Meyer, to collaborate with an Iraqi poet, Elham Al-Zabaedy, and an Iraqi composer, Qais Ouda.

At the height of the violence in Iraq, there was an unfortunate ritual whereby to find your missing loved one you were encouraged to go to the morgue, and endure a slide-show of thousands of faces. If you didn’t see your loved one’s face, then perhaps they were still alive. The characters (and the audience) are enduring that ritual in this photograph. 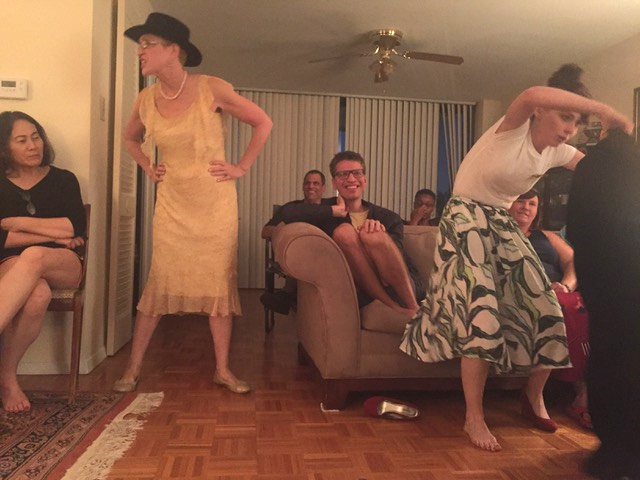 ​Alexis Clarel, wearing a yellow dress, puts on a man’s hat and incites a frantic Sally Gilmer (green skirt) to portray her slave-owning brother in a scene from The Priceless Slave. The play is set in pre-Civil War Louisiana, but history shows us that the risk of enslavement is a constant threat, and so we dressed our actors in modern clothing, and performed the play in Manhattan living rooms. Everyone else in the picture is an audience member. We felt that the proximity to the modern-dress actors would enable us to alternatively cultivate and crack the audience’s complicity in the play’s action.

We love the divergent response among the audience members seen in this photo. Thinkery & Verse creates moments that deny an audience a fully communal response. Pluralism is a key fact of democracy, and we prefer to create theater in spaces that help us come to grips with a diversity of responses to particular moments.

One of the quirks of The Priceless Slave is that there are no intelligible white male characters. The cast mostly consists of women, and the three ‘white’ roles were played by actors who identify as Jewish, Muslim, and Latina.

Much Ado About Nothing 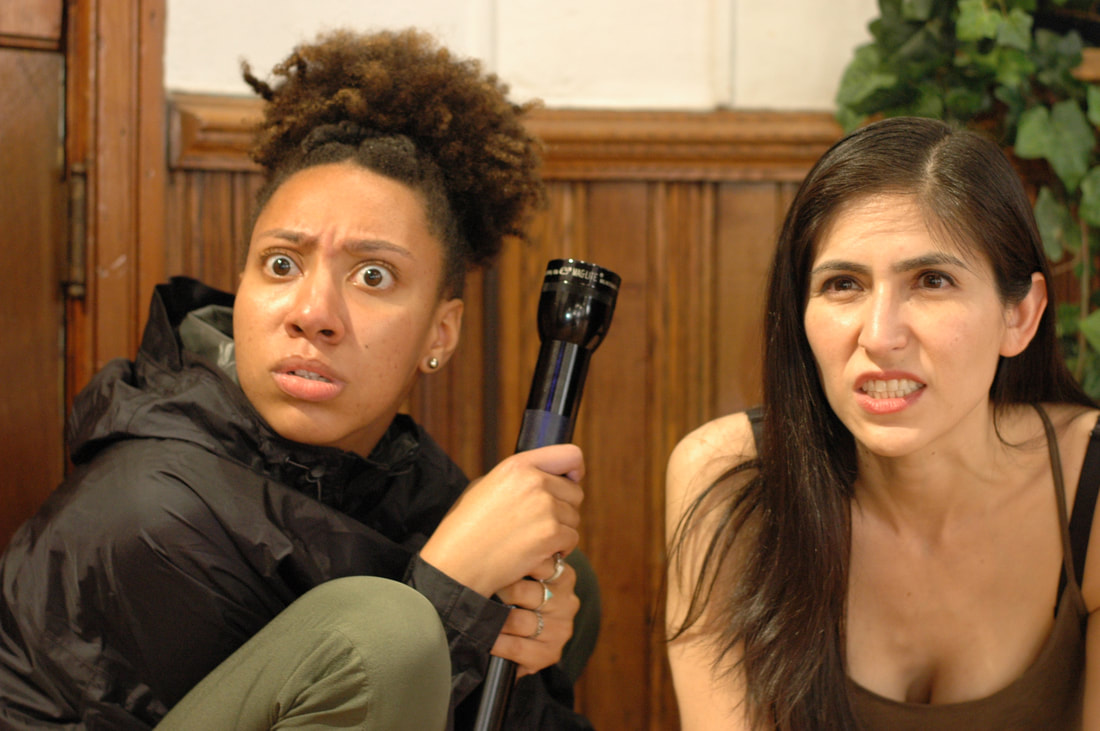 ​The image on this page comes from my three woman, one man adaptation of Much Ado About Nothing that we directed in the summer of 2018. In the above photo, Dogberry and a member of the Watch prepare to pounce upon the play’s villains. Dogberry’s malapropisms baffle modern audiences, and so we replaced the Watch with ‘Watch Dogs’ (thus the actor growls and bares her teeth) and had Dogberry ‘interpret’ the growls and barks of the Watch Dogs. The actor playing Dogberry also played Beatrice.

We keep our rehearsal rooms free flowing, and usually have actors improvise a scene several times before we start to assign blocking. Before we settled on dogs, we also played the scene as gangsters, nationalist thugs, pigeons, and a sex cult. Turning into dogs was the most radical move, but also made the most sense within the context of the play.

Taking a cue from the director Milo Rau, we also hold at least half of my rehearsals outside of the confines of a traditional space. Coffee shops, parks, houses, churches, and trains all serve to help keep the actors on their toes.

Much Ado About Nothing

​Here is another image from Much Ado. Dogberry has become Lady Beatrice, Watch Dog has become Lady Hero, and Benedict has transformed into Lady Margaret. To create Hero’s wedding dress, we’ve asked the actor climb up a ladder and marvel at her own gown. In a few seconds, the ladder will transform into the front door of Leonato’s mansion, and then vanish altogether for Much Ado’s infamous wedding scene. The actor playing Hero (center) also played Claudio, and the climax of the play centered on her self-assault and eventual self-conciliation. Interestingly, her portrayal of Hero was the most empowered version of the character that we have seen, probably because she only appeared as Hero when speaking a line, and therefore avoiding the sticky problem of an actress standing mutely on stage for two hours while her life, sexual habits, and marriage prospects are discussed. In our version, you only saw Hero when she spoke, and I think we both clarified and condemned the violence and misogyny.

When our actors rapidly switch characters without changing costumes, we refer to it as collapsed casting, rather than doubling. We learned the technique from companies like Bedlam, Fiasco, and Actors from the London Stage, and we think it serves as a method of loosening up the audience’s imagination. 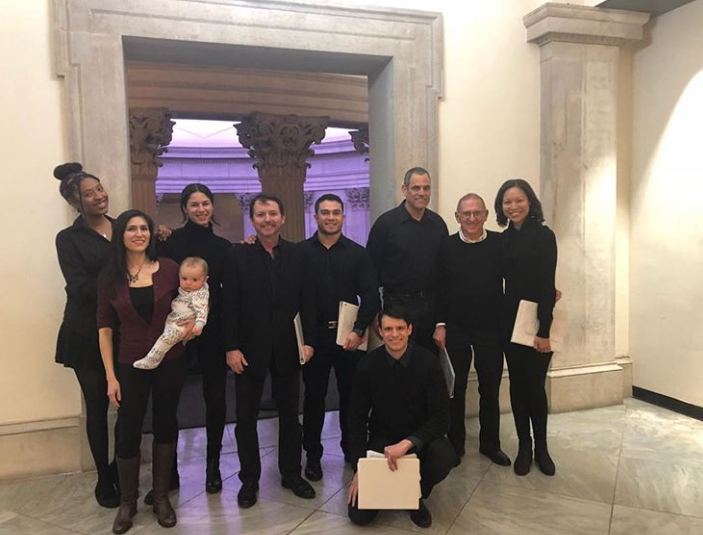 ​The final photograph is not technically a production photo, but instead a group photo just before a performance of Autumn Ever After in the spring of 2018. We deeply admire artists like Ivo von Hove, but living in a democracy compels us to integrate our art-making with political development of our local community. The performers were a blend of military veterans and conservatory trained actors, and we devised the script with them through a three-month humanities project with Aquila Theatre. For Autumn Ever After we recruited the performers, created a process for devising the play, and secured Federal Hall from the National Park Service as a performance space.

The military veterans wanted to create a play that showed the consequences of extreme nationalism, and so we felt that the best place to stage it was Federal Hall, a historic building in downtown New York. It was the site of several interesting moments in American history, including George Washington’s inaugural address, the first Congress, one of the worst anarchist terrorist attacks in American history, and the Occupy Wall Street protests.  We had to tune the play’s language so that it would still resonate among the cacophonous echoes of a marble dome, but it proved a fascinating project.
Thinkery & Verse LLC